It was another early start on the Tuesday morning as we packed up the van and left Osnabrück. We stopped for breakfast at a petrol station along the way into the Netherlands, I topped up the tank a little, just enough to get into Netherlands… since the cost of fuel in Germany at the moment is astronomical. While the Netherlands isn’t that much cheaper, it’s still cheaper.

Along the way, I was presented with a origami ring with a cute little puppy face drawn on it that little Varvara had made. It’s absolutely adorable! My new favourite thing!

We arrived in Utrecht around 11am and I made a beeline for the Central Station, where we’d be meeting Victoria and Dasha’s friend that they’re planning to stay with until this nightmare is over.

Driving a van on the other side of the road in an unfamiliar city is tough at the best of times. Even moreso when you’re a bit knackered from all the driving you’ve been doing. One thing that would help is that if Google Maps used its very clever AI to figure out that you’re driving, and instead of guiding you to a one-way street where there’s nowhere to stop when you ask it to direct you to train station, it could, y’know, direct you to a nearby carpark.

Anyway, after a bit of muckadoolin’, I parked under the Hoog Catharijne shopping mall and we all got out and stretched our legs. We’d made it! Once in the mall, Victoria contacted her friend and while they waited for her to arrive, I said my goodbyes.

I gave Victoria some money, she didn’t want to accept it, but I explained it was for her baby, due at the end of August. I said I hoped they would never know war. We both got a little teary. 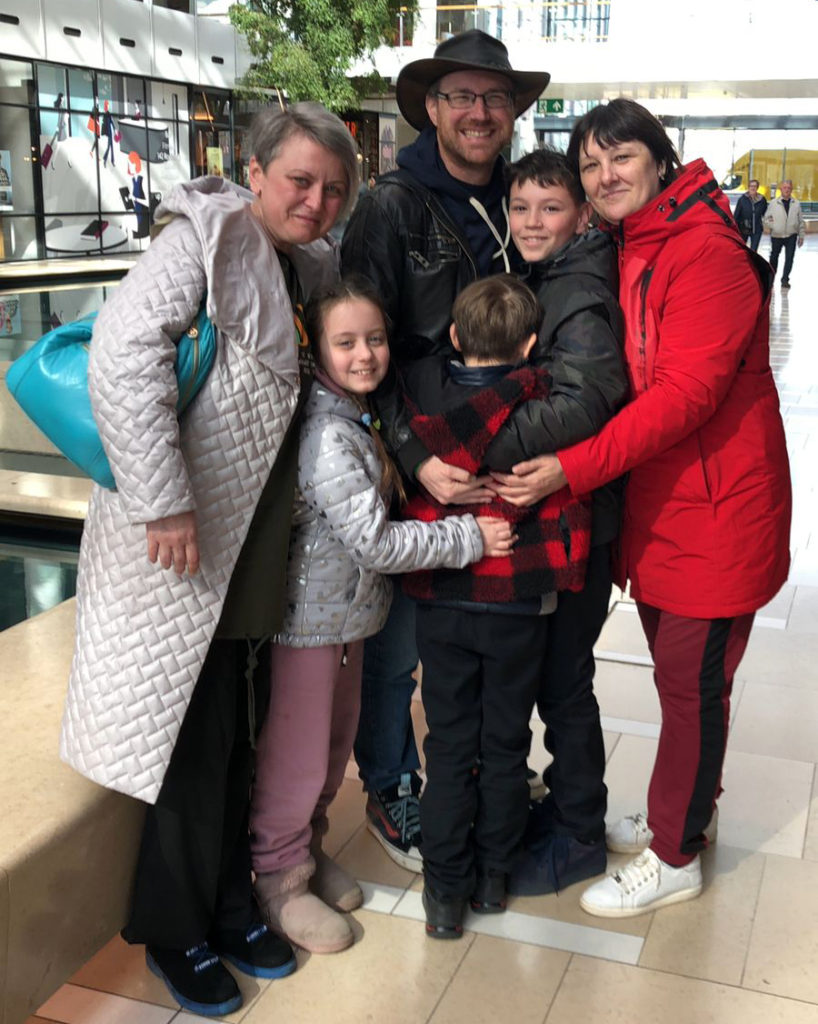 My primary objective complete, I raced off towards Calais in order to catch the Eurotunnel train to Folkestone ASAP. I had to get the van back to Ciaran in Hemel Hempstead by 7pm, then get the train to King’s Cross, then hop on the 20.03 to Leeds and then onto 22:43 to Durham, arriving at 7 minutes past midnight. I had it all worked out like clockwork.

Unfortunately for me, “clockwork” and “Brexit” do queer bedfellows make.

Since I was driving one of Ciaran’s vans, he put me on his Channel Tunnel account. This meant that each crossing would be half the normal price. However, it also meant that I needed to provide what’s called a GVMS number in order to board the train… even though the van was empty. This is something that has come into force since the UK stupidly left the EU, an act of such monumental stupidity it could be seen from Alpha Proximi. With the naked eye.

At the time of writing there’s a 20 mile queue of lorries along the M20. The disgusting gruesome lying pigmen who make up the Conservative government that’s running our country into the ground are telling us that this is because P&O sacked 800 British staff and replaced them with foreign workers, something they would not have been able to do if we were still in the EU. They’re telling us that it’s because a DFDS ferry was recently damaged and out of action. They’re telling us it’s because of the Easter holidays.

It’s because the government website from whence you can get yourself a GVMS number has been down for the last week or so.

Happily, the website had come back online yesterday, so Ciaran had got the number and had sent it over to me. However, when I arrived in Calais in good time to make my train… I was told that there was a problem with my GVMS number and I couldn’t enter the port until things were sorted out.

This is a case of a British citizen of good standing, driving a British-registered vehicle with no goods in it whatsoever (not even a sarnie), being told he can’t come into the country of his birth because the British government can’t organise a piss-up in a brewery, never mind a website system that actually works. Track and trace, anyone…?

So I was issued an EXIT pass. I called Ciaran. He told me to stop at the little building to the left of the exit lane, which I did. He was still on loudspeaker, swearing like a docker about Brexit, while I was trying to show the nice French lady my GVMS number. The French lady and her colleague were laughing at all the new Anglo-Saxon words they were no doubt learning. They punched the GVMS number into their system and everything came up okay. They then cross-referenced it with an online form that looked like a scan of something spat out by an Amstrad PCW’s dot matrix printer in 1986.

It all checked out. They didn’t know what the problem was.

So I jumped in the van, if I didn’t stop on the way to the tunnel I could just about make the next crossing. Lane 3, here we go…

I was issued another EXIT pass.

So I swung around to the little building to the left of the exit lane and ran inside. They were dealing with another driver so I had an excuriating 5 minute wait for them to come to me. I explained that I had been turned around again. That’s not right, said the nice French lady. She got on the phone, spoke to the guy in the booth of Lane 3, okay you can go through now. 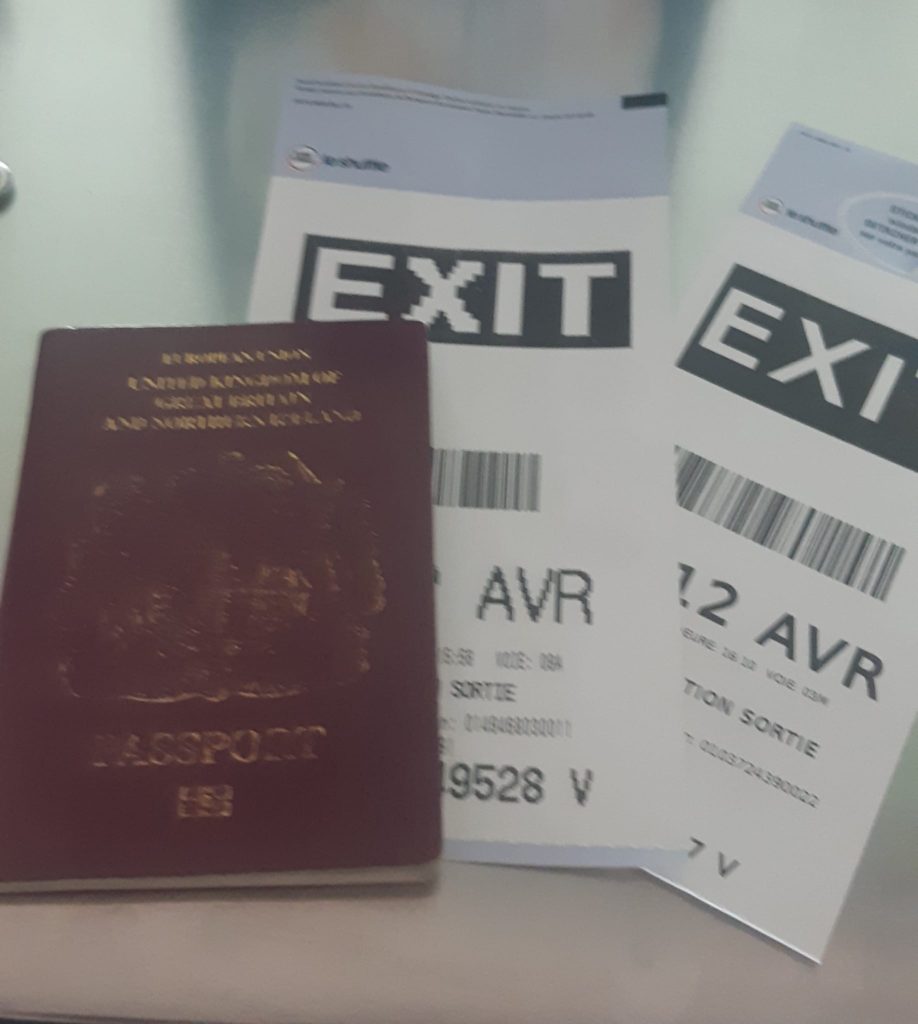 I thanked the lady, swung around to the entry gantry for the third time of asking… and got in. I didn’t stop for anything, I just went straight towards the train.

Yep, one more inconvenience – I had to get stamped out of France. There were 4 lanes to choose from, if you had an EU passport. If you had a British passport there was a choice of one. So I waited. It took 30 minutes to get through. I had well and truly missed the train that I needed to get in order to make my connections.

After screaming into the void about Brexit and everyone daft enough to vote for it, I got on the next train. Ciaran, being a top sport, said that he’d take me to Peterborough station so I wouldn’t have get back to London… I could just get on the train to Leeds from there.

While the van was on the train going through the tunnel, I tidied up the vehicle as best I could, vacuum cleaner notwithstanding.

Once back on English tarmac (made from Saudi oil), I marvelled at the queue of lorries along the M20, which stretched as far as the eye could see, and then some.

According to reports, the poor bastards stuck in this Brexit traffic jam of truly biblical proportions weren’t even allowed out of their cabs to use the loo. There were no loos. They had to piss in a bottle, shit in a bucket. And then have that bucket in the cab with them. For up to 48 hours. Oh, and the police weren’t allowing them to sleep either, because you’re not allowed to sleep on a motorway, even one that’s been turned into a car park by Brexit.

Pretty such that’s against the Geneva convention. But then torturing lorry drivers is what Brexit is all about, right? That and catching the wrong type of fish because reasons.

I got to Ciaran’s place around 7.30pm, and after we had sorted everything out with the Stepwagon, we had just over an hour to get to Peterborough station in Ciaran’s main van, the one he would be taking to Paris immediately after dropping me off. According to Google Maps, we were going to make it by the skin of our teeth, even in a van that was fully loaded with crockery.

However, about 15 minutes into our mad dash to Peterborough, I checked on my phone to see if the train had left King’s Cross. It had been cancelled. Bloody cancel culture ruining all my plans. However, this was a good thing. First up, it meant we didn’t have to rush as I could now get the next train, secondly, it meant that I didn’t have to change at Leeds – I could just stay on all the way to Durham.

So Ciaran dropped me off at Peterborough station around 10 minutes to nine. I thanked him for all his help and then entered the station just in time for the little cafe on Platform 1 to have turned off its coffee machine. The wonderful lady gave me a free cup of tea though, for which I was very grateful. She then asked if I wanted a pastie, since they were just going to get thrown away. Yes please. Don’t ever underestimate the power of small kindnesses.

I had an hour’s wait for the next train, but before long I was winging my way back home to sleep in my own bed, job’s a good’un. I got to Durham at quarter past midnight.

© 2022 UK4UKR.com | Website by Graham Hughes
PayPal donations processed through Eärendil’s Star Ltd.
“A light to you in dark places, when all other lights go out”